Posted on November 11, 2019 by goldcountryguide

Return client Robert and first timer Elisa were on board with me to hopefully catch a salmon or two. The morning was cloudy and after setting four rods we were under way and within 50 yards the starboard side went to down and Robert grabbed the rod while Elisa and I cleared the other rods Robert had his hands full as the salmon was putting up a great fight and finally I was able to put the fish into the net. After heading back up to the top of the run we maybe went 100 yards and this time the same rod was hit again and Elisa grabbed the rod like a pro and started the fight and the fish was really putting up a tremendous fight and the fish was not about to give up and Elisa was starting to really strain but finally I was able to get the fish into the net. Later on into to the run one of the back rods went down very hard and I could tell that this was a very large fish unfortunately it came unbuttoned half way to the boat. That would be it for the day. Still a great for these two as the were really excited to catch a couple of King Salmon from the Sacramento river. Thanks again you two…………………………………. 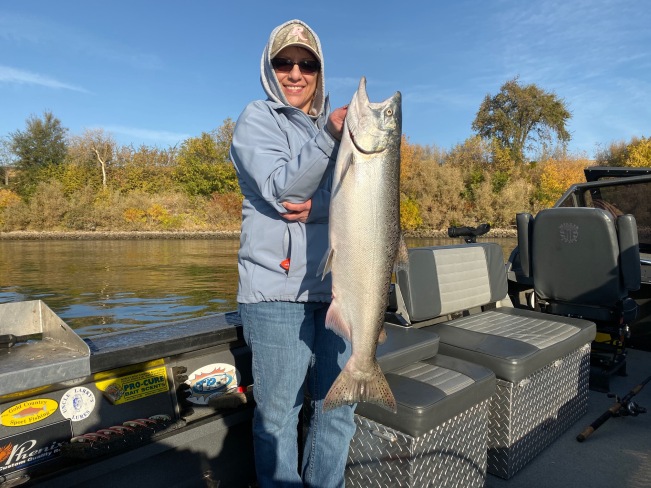